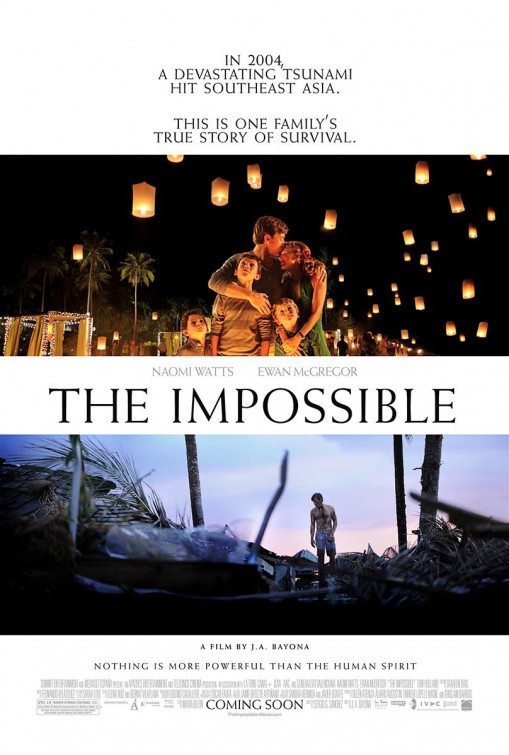 “After that, when I came up, I was on my own. That was the scariest part.”
– Henry Bennett

Henry Bennett (Ewan McGregor) and his wife, Maria (Naomi Watts) are happily married and living in Japan with their three sons, Lucas (Tom Holland), Thomas (Samuel Joslin) and Simon (Oaklee Pendergast), and are on a lovely Christmas vacation in Thailand. Their room was incorrect, but the ever helpful Thai hotel employee shifts them into a luxury suite closer to the ocean. Their peaceful holiday starts and is progressing wonderfully.

On December 26 2004, the family goes to the pool with most of the other holiday makers at the resort. They are having a blast when a roar and a rumble takes on everybody’s attention. Before they know it, a massive tsunami rolls through the resort. The family is ripped apart, and when Maria surfaces, she cannot find anyone. Soon she spots her eldest son, Lucas, and the two make a desperate attempt to get to each other. Maria is badly injured, and Lucas is heartbroken. Locals eventually pick them up after they rescue another little boy called Daniel (Johan Sundberg) and escort them to the overcrowded hospitals. In the hospitals, Maria seriously needs surgery, and she sends Lucas off to do something, to help people. So he begins to go through the tsunami victims, trying to bring families together again. Lucas has taken it for granted that his father and brothers are dead.

Meanwhile, Henry has recovered Simon and Thomas, and desperately wants to find Maria and Lucas. He starts his journey, while Maria and Lucas are on their own. Will the family be able to find each other, and will they all survive a paradise vacation turned sour? Will they make it out of Thailand alive, together as a family again?

I would give The Impossible 5.5/10. It just didn’t grip me (yep, I can see I am going to Hell for that). The event was truly disastrous and absolutely terrible, and the movie itself was not a bad depiction, there was just something wrong with the way that it was told. The movie got me, and at the same time it lost me. There was a lot that had me thinking if the director just implemented it differently, the movie might have felt a bit more whole and complete. This family was by far the luckiest family I have seen in a long time, and I am glad that things worked out so well for them. Another thing the movie got was the total terror that a tsunami brings, and the aftermath was shown quite well (such as the hospitals, what places looked like, etc.) I can only imagine the fear and the horror that a natural disaster like that can bring, and I would not wish to experience something like that. You really think about how lucky you are when you watch the film, I will most definitely give it that. I don’t think I will be watching it again in a hurry, or buying it.