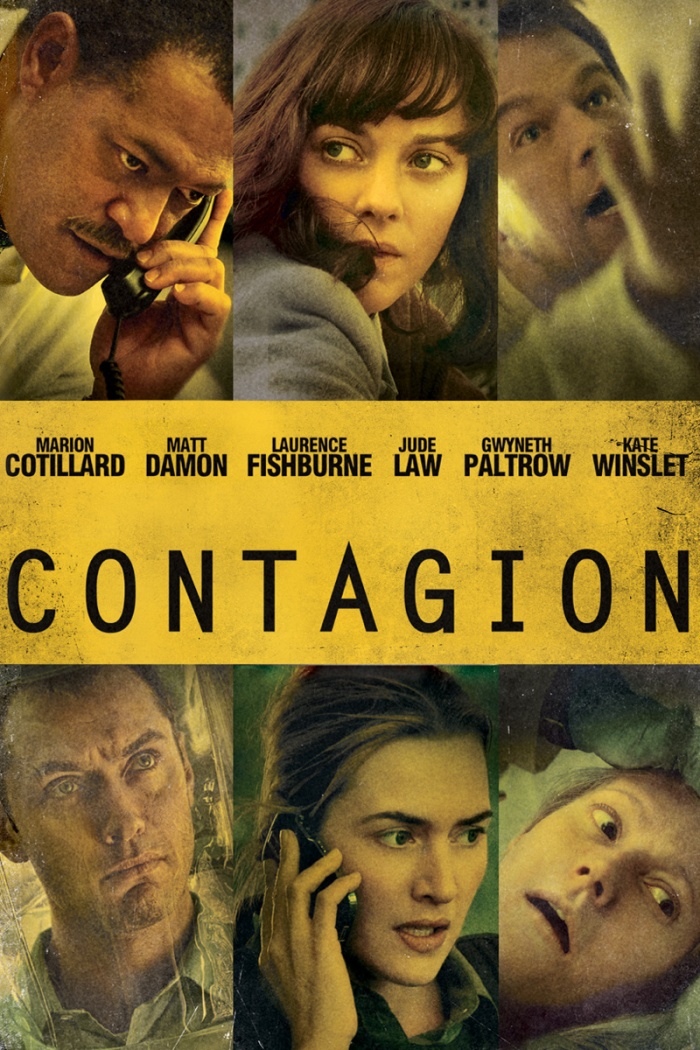 “So we have a virus with no treatment protocol, and no vaccine at this time.”
– Dr Ellis Cheever

A disease seems to be spreading, and it appears to be nothing too major. A flu, some illness, simple stuff. Beth Emhoff (Gwyneth Paltrow) returns to Minneapolis to her husband Mitch (Matt Damon) and son Clark (Griffin Kane). She seems ill, and as such stays home from work. Soon, though, Mitch is called to his son’s school to collect him seeing as he is ill. Blogger/reporter Alan Krumwiede (Jude Law) has stumbled upon the story and wants to make it known to the world, but is told that there is no reason to cause a panic, and is turned away. Soon after, the death toll begins, and it makes the news eventually. People are starting to panic; it seems to be spreading rapidly.

Mitch is placed in isolation after his wife and son die, and his daughter Jory (Anna Jacoby-Heron) soon joins him to check up on him, not having been home when the contagion spread. He seems to be immune to the disease. In an attempt to leave the city, he learns that there is a quarantine in place for everyone, and that nobody is allowed to leave. Dr Ellis Cheever (Laurence Fishburne) of the Centres for Disease Control and Prevention meets with people from the Department of Homeland Security, and they want a game plan. The disease is suspected to be a bioweapon, and Cheever puts Dr Erin Mears (Kate Winslet), an Epidemic Intelligence Service, on the case, and wants her to investigate the disease and its origins, how it spreads, etc. The disease is spreading around rapidly now, and Dr Mears is having an issue getting local bureaucrats to put money into the project.

Dr Ally Hextall (Jennifer Ehle) at the CDC isolates the virus base, seeing that it is a mix of material from pig and bat viruses. However, now that she knows what the issue is, there is still the problem of finding a way to create an antivirus, and soon. The world’s population is rapidly diminishing. Fear runs rampant throughout the globe, and soon the societies fall into disarray. Mitch puts him and his daughter under lockdown and refuse to see anyone in fear of her getting infected, and is trying to deal with the fact that his wife and son are dead and that she cheated on him prior to dying. Dr Cheever is fending off everyone that is harassing him for answers. Meanwhile, things are getting so crazy out there that doctors are being kidnapped and held ransom for antiviruses, wanting them first. Among them is World Health Organization epidemiologist Dr Leonora Orantes (Marion Cottilard), who is taken to a little village and instructed to teach the children while they wait. Krumwiede is causing stirs when he is scaring the population with his conspiracy theories and personal opinions, taking many people for a ride now that he has the power to do so.

Will anyone be able to isolate the strains of the virus that are so deadly and create a vaccine? Will the world be able to recover from the epidemic that they are suffering? Will societies be able to rebuild after human nature snaps out of its social norms and runs rampant?

The concept was alright – unknown disease spreading rapidly, hopping continents even and working fast to knock the human population on its ass – well done. It is not something anyone wants to contemplate. How do you escape it? How do you stay safe? What if you become infected? The implementation was alright, though there were so many things left unanswered, so many leaps and bounds with no explanation and a lot of moments of lull. It was interesting, just failed to hold you from the beginning to the end, but it kept you watching, just not always so much on the edge of your seat. The cast was very good though, and managed to keep you interested from the off, each of them playing their roles incredibly well. There was a lot going on, and being able to see the entire story from a lot of different points of view was worth it – you understand what they are going through, their action and how they are struggling through things, so from the average person to the businessman to the person that is working to fight the disease, everyone is together on it. Also watching how people react to the unknown and how easy it is for the world to fall into disruption and chaos due to fear and the unfamiliar is insane. Jude Law’s character started off with a purpose, but that soon dissipated, and his role soon became an annoyance and a bit of a mystery (and no, not the good kind, either). Worth checking it, it was a decent film in its own right, though drastically flawed and filled with lull.