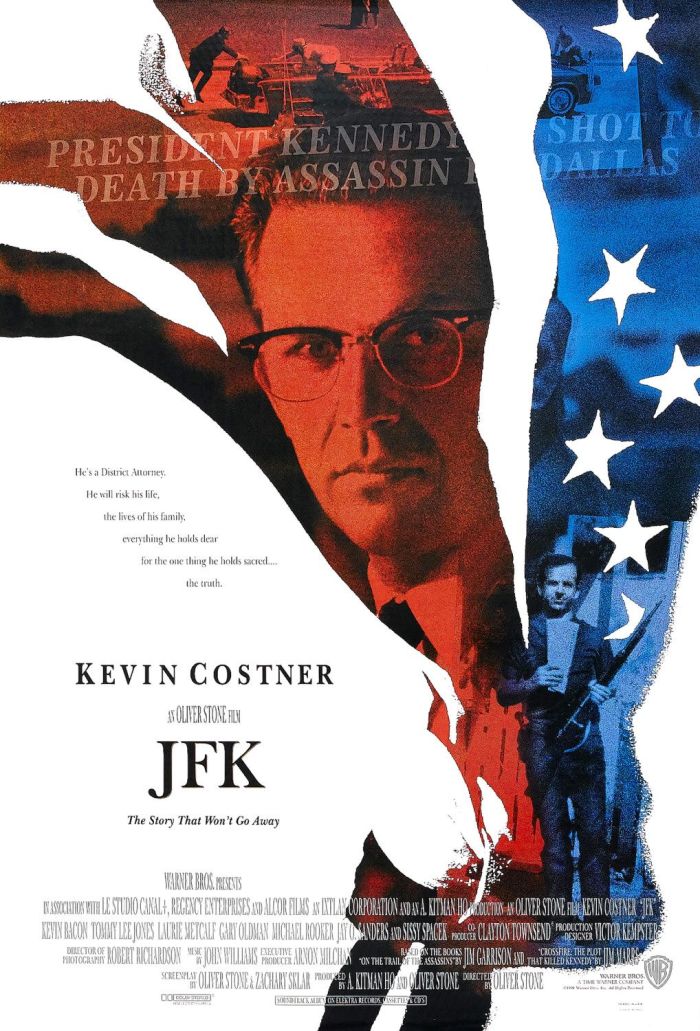 “Telling the truth can be a scary thing sometimes.”
– Jim Garrison

A movie about the JFK assassination? Man, this must have been tailor made for me! Ask anyone I know (Natasha knows about as well as my husband) how I feel about the Kennedy assassination. It is ridiculously fascinating and I love reading about it or watching things on it – it never gets old for me. So yeah, this is something I just never got to, and this was the year to correct that.

I think JFK is actually a great movie for someone to watch who doesn’t really know much about the Kennedy assassination, or the ludicrous explanations that were put forth about it, and that embarrassing investigation into it. Really, it covers a lot of relevant ground, and also happens to have another story over and above it, bringing to Zodiac to mind, because of watching Jim Garrison’s obsession with the case. A lot of research went into this and that is evident, but I would not say to go into this movie and take everything it presents as gospel, for reals. Look at it as entertainment, don’t take it as a hardcore documentary and the holy grail for answers to the JFK assassination. Enjoy it for the conspiracy it discusses.

The movie is shot well and I enjoyed the pacing – it is long, but takes the time to lay down the evidence and the story and then get going with it, which I liked, but I can see how it could annoy others. One also cannot deny that the movie looks and feels dated. The pacing was just fine here, and the performances were pretty damn good all around. I was so engrossed by the telling of this from Stone, how the case was presented and researched and pursued. It was quite tense and definitely entertaining. There are obviously a lot of issues with the movie in the sense that there are a lot of fictitious characters brought in and spewing “facts” and Stone sets out the good guys and the bad guys in a classic black and white way without actually finessing anything there. The movie is also presented as “fact”, which at times is a little difficult to swallow, and you can see a lot of confirmation bias going on for Garrison at times. That being said, this movie had a lot of things to balance, from fact to fiction and everything in between.

Overall, JFK is an entertaining watch sure to keep you hooked, especially if you enjoy conspiracies (whether you take them seriously or just like to hear what they are) and especially if you are interested about what happened that day in November of 1963, provided you don’t think this movie is going to give you all the answers, evidence and proof you are looking for. But as a movie taking a look at some of the conspiracies surrounding the assassination, balancing fact, fiction, everything? So worth it, truly.

SYNOPSIS: Life can turn on a dime—or stumble into the extraordinary, as it does for Jake Epping, a high school English teacher in Lisbon Falls, Maine. While grading essays by his GED students, Jake reads a gruesome, enthralling piece penned by janitor Harry Dunning: fifty years ago, Harry somehow survived his father’s sledgehammer slaughter of his entire family. Jake is blown away…but an even more bizarre secret comes to light when Jake’s friend Al, owner of the local diner, enlists Jake to take over the mission that has become his obsession—to prevent the Kennedy assassination. How? By stepping through a portal in the diner’s storeroom, and into the era of Ike and Elvis, of big American cars, sock hops, and cigarette smoke… Finding himself in warmhearted Jodie, Texas, Jake begins a new life. But all turns in the road lead to a troubled loner named Lee Harvey Oswald. The course of history is about to be rewritten…and become heart-stoppingly suspenseful. – via Goodreads

I am going to suffer such a book hangover because of this. I have been reading it for weeks now. It is quite a long book, and I was snatching snippets of time whenever I could to read this, and I loved every moment of it. In fact, I was pleased it was being drawn out the way it was for me, meant I had so much more time to enjoy it. Alas, I had to finish it sometime.

I am a huge King fan. There are still so many of his books I have yet to read, and I hope to someday have read them all, or as close to that as possible. I have been eyeing this for years, and it just seemed like the right time recently. I am fascinated by the JFK assassination, and I figured a book dealing with time travel to stop that assassination could only be good. I was so right.

King takes time to set up the story, so nothing is rushed, and you understand what is going on. He also takes his time with the characters, so they are rich and full, and become real people. Jake Epping really morphed into George Amberson for me, and Sadie was a wonderful woman. Then let us not forget Miz Mimi, Ellie, Deke, the adorable Mike or his unlucky girlfriend, Bobby Jill. I really appreciated all the characters. There are so many more than the ones I have mentioned, but they are the standout ones for me. I also really appreciated the relationships between them. They came across as genuine, and real. Also, the love story between Sadie and Jake/George. is beautiful. This is how I enjoy a romance to be woven through a novel. It just clicked, and didn’t come across as forced or unnatural.

Considering the time travel starts in 1958, you know that there is some time before the Kennedy assassination is to take place, so naturally you are going to be spending a lot of time in the past with Jake/George. I was okay with that, and what a story he had to tell! I feel that 11/22/63 had everything: some history, some romance, some humour, some drama, all of it. And it was fascinating. I was not bored at any point during my time with this book, and thought the pacing was good. I also liked how the book never really became predictable. There were so many ways certain things could have gone, some did, some didn’t, and there were plenty things that happened that went against what I thought. It was nice to have a book that kept me guessing again for a change.

King is also the master of putting just a dash of creep into his work, so every now and then, as much as “the past harmonizes”, there were other things that cropped up, not too in your face or anything, but enough to get just under your skin. I really liked that. Overall, I feel that 11/22/63 is a fantastic read that is worth every moment of your time. It is engaging, has a great set of characters and events to work with, and everything comes together so well. The book is a bittersweet affair, one I truly enjoyed, as you can tell. I don’t know when last I was this invested in a novel, so it was a welcome delight for me. King just doesn’t disappoint.