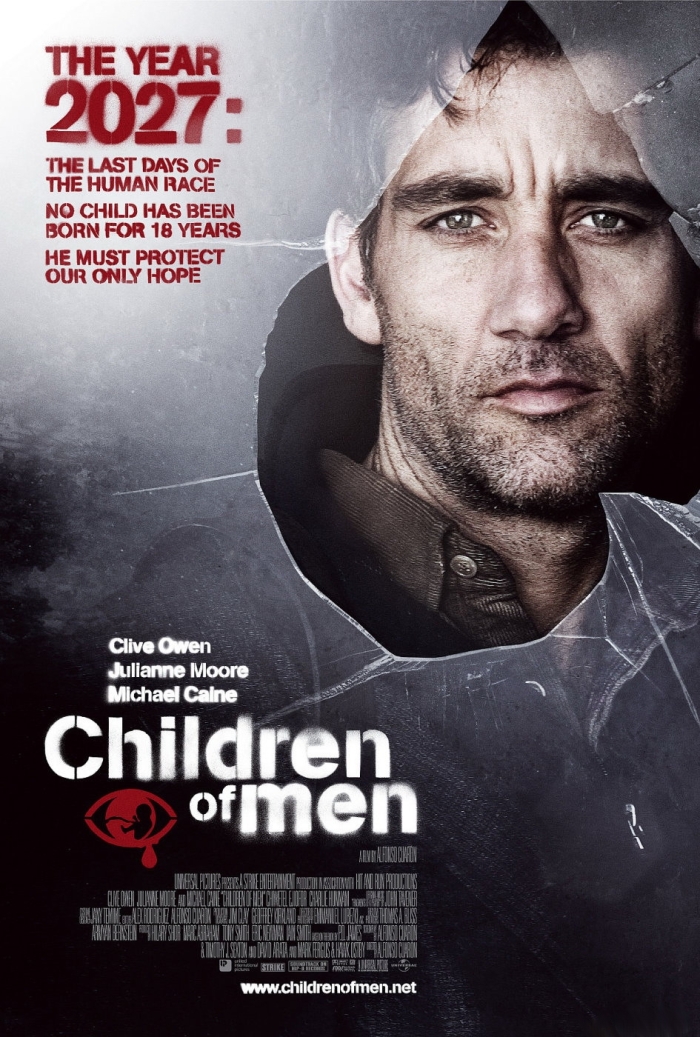 “As the sound of the playgrounds faded, the despair set in. Very odd, what happens in a world without children’s voices.”
– Miriam

SYNOPSIS: In 2027, in a chaotic world in which women have become somehow infertile, a former activist agrees to help transport a miraculously pregnant woman to a sanctuary at sea. – via IMDB

Well, well, well. I didn’t think I would dislike this movie as much as I did, as much flak as I may get for this. It came in recommended from my neighbour, though he said that there were a few scenes that the whole film basically hangs on. I didn’t realise that this movie had this mad love surrounding it and critical acclaim and all, and I went in relatively blind in terms of plot. It was evident in the first fifteen minutes that I was not going to enjoy it. I hated the camera work, it was jumpy and all over the show and gave me a headache. Then there was the dialogue, and I am sorry, there is nothing that will change my mind on the fact that I thought it was horrendous and awkward and didn’t flow right. There were more irritating characters than you could shake a stick at and the world may love Alfonso Cuarón but this was just not that great. It felt incredibly long, and I was ready to start bawling when I was sure we were nearing the final third, only to find that we were barely halfway. What annoys me is the fact that it had quite a good premise. It was interesting, it had potential, there were things to do and places to go and instead all that potential was squandered, and littered with bizarre and highly unlikable characters and events and things don’t flow properly. I was expecting some awesome plot twists, but none were delivered as promised. It was utterly predictable, and I was underwhelmed by the fact that the infertility issue was never explored more. Also, that ending! After all my pain and suffering, that’s how it went? Ugh. There were a few scenes that were done well and some things that were beautiful, especially when you think about it, but there were others with really flawed logic (such as a dude pushing a car all by himself, containing two women, along a muddy country round with hills). I feel that the cast was underused, as well. Julianne Moore and Michael Caine are big draw names (for me, anyway), and not much was really done with them when you get down to it. I know this is a pretty harsh review, but I was no fan. At all. And then when I saw the rave reviews and ratings coming back I was sure that I had missed something completely, and I did give this movie a fair shot. Overall, I was really hoping for more and instead I was left with this bitter taste  of disappointment, and that sucks. Really. 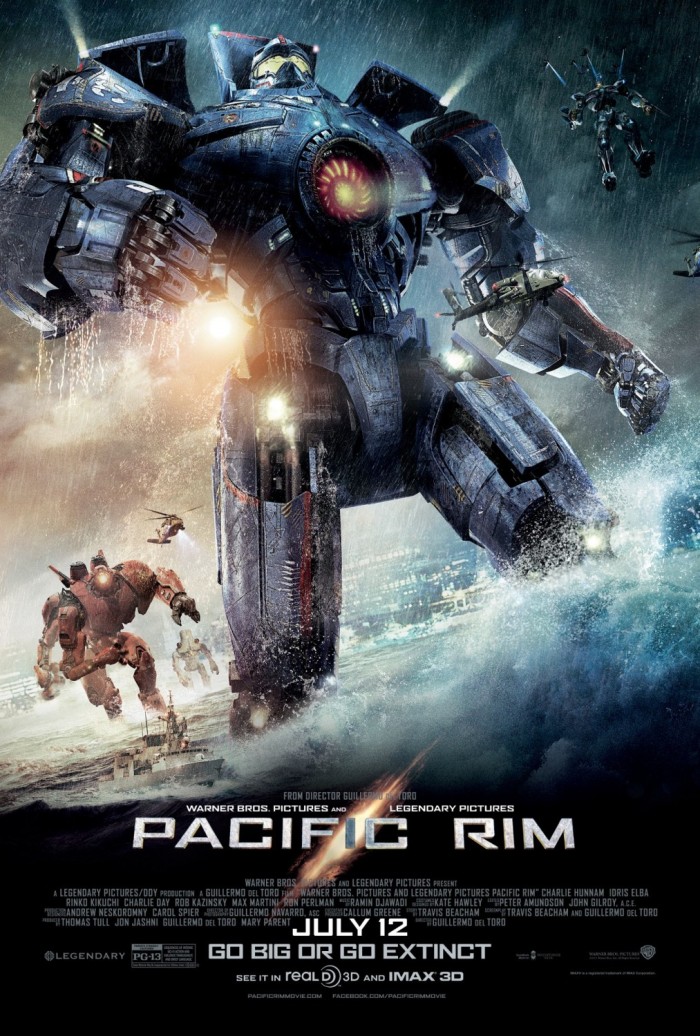 “When I was a kid, whenever I’d feel small or lonely, I’d look up at the stars. Wondered if there was life up there. Turns out I was looking in the wrong direction. When alien life entered our world, it was from deep beneath the Pacific Ocean. A fissure between two tectonic plates. A portal between dimensions. The Breach. I was fifteen when the first Kaiju made land in San Francisco.”
– Raleigh Becket

In 2013 massive alien monsters called Kaijus start attacking Earth. They have access through a oceanic portal in the Pacific, and they are wreaking havoc on Earth. They seem unstoppable, but then the humans start fighting back. They build massive warriors, weapons, called the Jaegers. These are collosal war machines, something manufactured by all the Pacific Rim nations. The technology used is that two people are linked together mentally to operate the machine, sharing the load. The pilots become famous, the Jaegers are successful, and they finally have some form of a defense against the massive and scary Kaijus. Two such pilots, two brothers, Raleigh (Charlie Hunnam) and Yancy Becket (Diego Klattenhoff) are called one night to take down a Category 4 Kaiju. While out there, Yancy is slain and Raleigh is terribly injured. He ultimately takes down the Kaiju, and manages to singlehandedly get the Jaeger Gipsy Danger to shore, where he leaves that life behind.

The governments call for the Jaeger program to be discontinued due to it being considered ineffective. Instead they focus their resources on building Kaiju-resistant walls to protect the cities. Raleigh now works on one of these construction sites, moving around and building. When the program is shut down, his old commander Stacker Pentecost (Idris Elba) appeals to him for assistance. He wants Raleigh to accompany him and the remaining Jaeger pilots to Hong Kong, where the four remaining Jaegers await for them to defend the coastal line while the wall is being erected. Pentecost has a plan to destroy the portal with a nuclear bomb, something that had failed in the past. He calls in two scientists, Dr Newton Geiszler (Charlie Day), a tattooed Kaiju enthusiast, and Dr Dr. Hermann Gottlieb (Burn Gorman), an introverted Englishman. The two are tasked with generating predictions of the Kaijus to come as well as find a way to break through their portal. Raleigh, meanwhile, needs to find a co-pilot, and he is not greeted particularly warmly by Chuck Hansen (Robert Kazinsky), who feels that Raleigh is in the way and weak, while Herc Hansen (Max Martini) believes that Raleigh will help.

Raleigh is having difficulty finding anyone that he will be suited with, and ultimately it is Pentecost’s right hand woman, Mako Mori (Rinko Kikuchi), whom he seems best suited to work with, but who Pentecost point blank refuses to send out in a Jaeger to fight, though it seems to be her dream. He seems to be very protective of her. Raleigh and Mako seem to connect on a whole new level, something more akin to what he and his brother once had. Dr Geiszler wishes to create a bridge with one of the Kaiju brains that he has in his lab, trying to connect with it like the Jaeger pilots do with one another, to see what memories they hold. Instead he opens a can of worms that is more than he can control. It would seem that the Kaiju fight as soldiers for an alien race that wishes to destroy Earth. The Jaeger pilots need to get themselves ready for the coming war, though Raleigh is still reeling from the loss of his brother five years before, and Mako deals with her fear of the Kaiju, feelings of vengeance as well as attraction towards Raleigh. 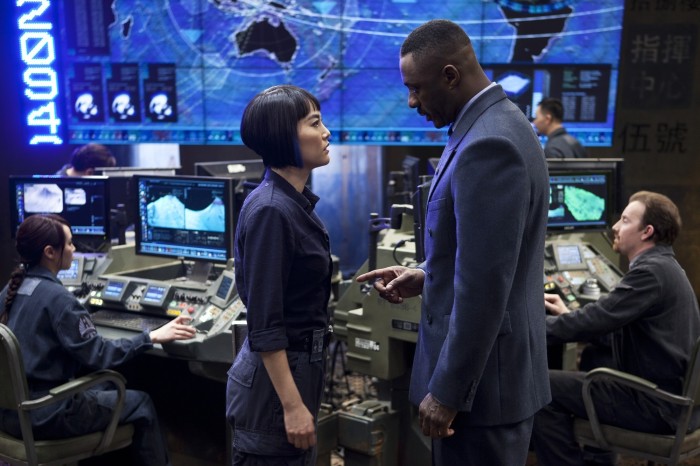 Will the Jaeger pilots be able to shut down and destroy the portal that the Kaijus are using to get to Earth? What is with Pentecost’s intense protection of Mako? What is in her history, and will she be given the chance to exact her vengeance upon the Kaiju? Both Dr Geiszler and Dr Gottlieb are onto something, but how will it impact the mission to protect the coast lines of Hong Kong? Will their research change anything? What do the aliens want with Earth after the humans are exterminated? Will the Jaegers be able to withstand and battle against the Kaiju, which are coming up as stronger categories?

Another movie that everyone insisted was a fantastic summer blockbuster and fun and all these many things that they promised, none that delivered (with the exception of the scientists, they were hilarious). So we watched this, and I was rather let down. For one, Del Toro seems to be hooked on overkilling with CGI, what is up with that? Secondly, Charlie Hunnam is a second rate actor. I am not a fan, and whenever he tries to pull his angry/serious/peeved face, he succeeds only in looking like someone wiped something really freaking nasty under his nose. And this is not saying anything against the character he played, I actually quite liked him. Then there is Idris Elba, who was probably the best thing about this movie, though I was not a fan of his accent really. Rinko Kikuchi irritated me endlessly, her character was an annoyance of note. The relationship between her character Mako and Hunnam’s Raleigh could have been much better had it just been developed a bit more. As it stands it happened out of nowhere and ludicrously, in a way that (yes I know this is an action and these things can be overlooked) that I just couldn’t choke down. These Kaijus confused me, too, because some Category 4 types are being cut down with swords (which seems most effective if only these chops would stop using guns and canons and start using the blades), and then they cannot be ripped apart by canons and crap, but when they are dead they are being harvested by men just being all regular and all that. I mean really? The whole way through watching this all I wanted in my life was for the new Godzilla to hustle the hell up so we can see some real dangerous and scary monsters (ED: that’s how long ago I watched and reviewed this – pre-May release). Anyhow, there was so much going on in the fight scenes I could not tell if they Jaegers had the upper hand or the Kaijus, which does not really make for good fight scenes. I was told that this would probably have blown me away in theatre, but I intensely doubt my feelings would have changed. I just didn’t really like this, and that is just that.