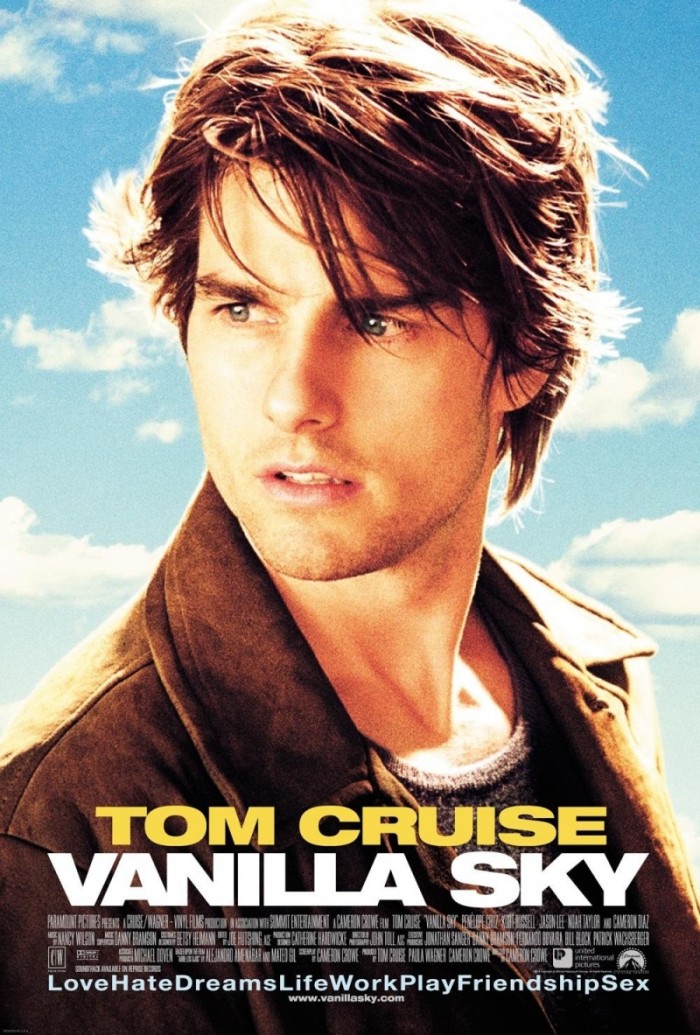 “The little things… there’s nothing bigger, is there?”
– David

SYNOPSIS: A self-indulgent and vain publishing magnate finds his privileged life upended after a vehicular accident with a resentful lover. – via IMDB

I know that there are people with some issues with this film, but I found it to be a rather decent one, and I enjoyed it. Despite all the awful reviews, Vanilla Sky is not the wreck that it is made out to be. By no stretch of the imagination a piece of perfection, it is entertaining nonetheless. Tom Cruise was well suited for the role, and didn’t even really get on my nerves. I am not a fan of either Diaz or Cruz, though they were the leading ladies for this. I think that is the only thing that actually got to me, but overall not enough to detract from the journey that you undertook with David Aames. Diaz pulled this role off far better than most I have seen her in, and managed to give a solid spine and feel to her character.  I liked the way the story was presented and laid out, as well as how it progressed.  There were plenty of plot twists and turns, and kept it fresh and interesting throughout. The back and forth banter between Dr McCabe and David was interesting, as well as David dealing with the tragedy he has been visited with. He did not deal so well with it, and there are plenty of times that you can identify with him, and plenty of times that you can see as a spoiled brat he took things too far. An engaging movie to check out if you have not done so before, and one to watch with an open mind seeing as it was bashed more than it deserved.

George Jung (Johnny Depp) refuses to be poor like his parents after they lost everything when he was younger, and does everything he can to not be that way. His father, Fred (Ray Liotta), tries to teach him that there is more to life than money. George moves to California with his best friend Tuna (Ethan Suplee). Everything that side is completely different, and a new world lies at their fingertips. George meets his girlfriend Barbara Buckley (Franka Potente), an airline stewardess, and soon they are on a new mission. Tuna comes home with the idea of selling weed in California, but brings a really terrible quality one back with him to start with. Barbara introduces to boys to Derek Foreal (Paul Reubens), the main dealer their side.

Together they make a lot of money, but it is not enough George. An old friend from Boston named Kevin Dulli (Max Perlich) runs into George and Tuna in California, and tells them that they could make a fortune with their weed back home. George is struck by an idea and gets Derek on board with having dope flown into Boston through Barbara. Soon, however, the demand outstrips the supply, and alternative means of getting weed need to be thought of. George goes to Mexico, and brokers a deal with a pot farmer there for a lot more supply. George is bust in Chicago with a lot of marijuana, and gets two years. He skips out on his jail sentence when he learns that Barbara is dying of cancer. Returning home after Barbara’s death, his mother Ermine (Rachel Griffiths) has him arrested, and he is sentenced.

In prison, he befriends his cellmate, Diego Delgado (Jordi Molla), who inaugurates him into the cocaine business. They meet up with cartel officer Cesar Rosa and negotiate a way to smuggle fifteen kilos of cocaine around as a sign of good faith. Though he is violating parole, George gets away with it. Diego is arrested again for something, and requests that George collect some cocaine he left with a friend. After being threatened, George needs to move fifty kilos of coke and soon, and brings in Derek from California. The two sell the fifty kilos in record time. Pleased with his skills, Columbian drug lord Pablo Emilio “El Patrón” Escobar Gaviria (Cliff Curtis) flies George and a now free Diege to Medellin, Columbia, where they are proposed a business deal. Together they become the top US importers, though Diego has no clue as to Derek’s identity, which causes friction between the partners. At Diego’s wedding, George meets his future wife Mirtha (Penélope Cruz). He now has the Columbian wife and partner.

However, Diego betrays George and cuts him out, stealing Derek as his contact after a lot of pressure forced George to reveal his source. Immensely rich, George leaves the game to concentrate on his pregnant wife, and embraces fatherhood wholeheartedly when his daughter, Kristina Sunshine Jung (Emma Roberts), comes along. George’s life is quiet, though his marriage with Mirtha is empty. Mirtha organizes a huge birthday party which gets raided by the FBI, and George is once again arrested. He agrees to take the fall so long as hi family is safe. Intent on getting his money in Panama, he finds out that his bank account has been seized and that he is broke. Suddenly, he and Mirtha have the same marriage his parents had, where his father was trying and his mother was always complaining. Mirtha has George arrested again when he tries to make some money for the family by moving cocaine again.

George’s life is falling apart and his daughter despises him. During his incarceration, Mirtha divorces him. He has nothing waiting for him on the outside. What will George do when he gets out? How will he make his money? Will he be able to salvage his relationship with his daughter that is founded upon a million broken promises?  Will George be out of the game for good? Will he find a way to fix the issues between himself and his mother, even if just for the sake of his father?

A 7/10 for Blow. Johnny Depp delivered a simply stunning portrayal of George Jung. The movie had an interesting layout, and is fantastic if you don’t try to tie the personal things back too closely to the events that went down. It is highly entertaining, though I must say Penélope Cruz irritated me no end. She was simply dreadful to watch, and work on each and every remaining nerve that I have. She was not good to listen to, and brought nothing to the table. Ray Liotta was excellent, though Rachel Griffiths was also dreadful – not as an actress or her portrayal, but her character. What a horrible person! I must give the film credit for having a fantastic soundtrack, I enjoyed it. George Jung seems to be a little egocentric, though Johnny Depp almost tried to give him more depth. He was not really a dangerous criminal, but his ambition did outstrip his talents. He was not what you could call the best dad, leaving a trail of broken promises and mistrust galore in his wake; it is little wonder his daughter was hurt so badly. However, I do not think that Mirtha was a really good alternative to have as the primary parent – she was mad. I thought the history of how cocaine spread through the States was incredibly impressive. The planning and execution was no small feat, and people were on a roll, but as always, greed will prevail. The one thing that defines this movie to me is truly Depp’s performance – he is an amazing actor. I wish he would do more dramas again as opposed to just the cuckoo characters (not that he doesn’t play them to the tee, but he is far more talented than just that). There were some crazy situations and incidences that you came into contact with in this film, and the story in incredible. There were flaws to this film, but overall it was solid, well put together and a good watch, though from what I read, they seriously skewed the viewers’ perception on who and what George Jung is. Worth the watch though, even though Cruz is an absolute disaster. She really detracted from the story for me.